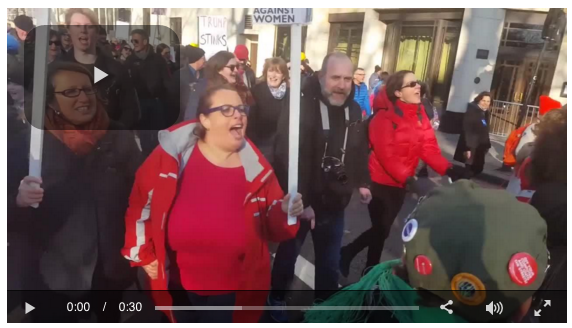 (Independent). Donald Trump is so unpopular that there are even women marching against him in Antarctica. The day after the inauguration of a president who bragged about grabbing women by their genitals, thousands will be marching in Washington and in more than 60 countries around the world, to “stand up for human rights, women’s rights and against hate.”

Well, today I came across this post on Facebook. I don´t know who wrote it, it only say “Please share if you agree”, but I have written several articles about the same issue – so I totally agree and therefore will share it!

But first I simply need to ask – why are women so good at complaining on issues that´s completely bullshit? Why won´t they look at the big picture and show the same attitude and anger – and for example raise their voice when body parts are cut off girls and women’s bodies, our sisters that can`t escape the torture of genital mutilation?

Is this atrocity not important enough to protest against?

Why won´t these women raise their voice and protest against discrimination and violence, bride burning, rape, acid attacks, forced labor, stoning and flogging of girls and women because they wan´t to have a decent life, girl brides and sex slaves, not to mention and gang raping as payment that takes place in some countries – is this not important enough to protest against?

I AM a woman.
I AM EMPOWERED.
I can make my own choices.
I can speak and be heard.
I can VOTE.
I can work if I want.
I control my body.
I can defend myself.
I can defend my family.

There is nothing stopping me to do anything in this world but MYSELF. I do not blame my circumstances or problems on anything other than my own choices or even that sometimes in life, we don’t always get what we want. I take responsibility for myself. I am a daughter, a girlfriend , a sister, a friend. I am not held back in life but only by the walls I choose to not go over which is a personal choice. Quit blaming. Take responsibility.

If you want to impress me, especially in regards to women, then speak on the real injustices and tragedies that affect women in foreign countries that do not have the opportunity or means to have their voices heard.

And that’s just a few examples. So when women get together in AMERICA and whine they don’t have equal rights and march in their clean clothes, after eating a hearty breakfast, and it’s like a vacation away that they have paid for to get there… This WOMAN does not support it. “Please copy and paste”.

Well, it is said that 2.5 million demonstrators across the world marched in protest against Trump because he is an immature sexist. The question is – why don´t these women show the same commitment to the issues above? Are not they important enough?

Also read about torture and genital mutilation in Norway, How boys react to violence against women, The mass attacks on women is violations on human rights, about Muslim mens cruelty against women and children, about Norway´s female organization Ottar and We need to stop war now!