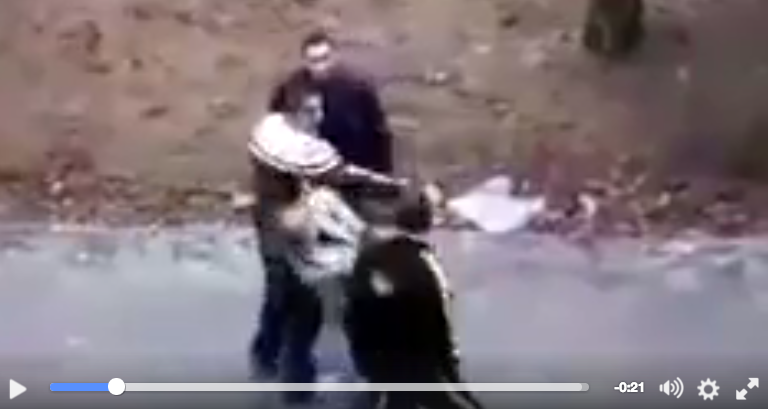 There is nothing more wretched than men that turns to violence towards women and children. When these “men” are teaming up in big groups, and harasses and demean women, like the cases we’ve seen in Cologne, Rotherham, Sweden, Oslo and many more places lately, they are no longer men – they are infected rats.

I have no words for what I think about the government, media and the police in these countries and in Norway, that instead of protecting women from this violent and sexualized mob, are handing them over to the sick mob to protect itself of being called racist!

The last events against women we have witnessed across Europe, is one of our biggest scandals when it comes to human rights violations in modern age. Here police, media and authorities in several European countries, have allowed Muslim men to rape, beat and harass women for years without doing anything about it. What they have done in fact – is to lull it down!

The Muslim men use a tactic that is well known to those who’ve followed the scant reports on the rape jihad as it has proceeded from Tahrir Square to Malmö to Rotherham: A group of men encircles the targeted woman or girl, trapping her while walling off police and other would-be rescuers. Knowing they are a protected class, the Muslim men have no fear of the cops. By the time “help” reaches one victim, the assailants have moved on to the next.

In Cologne, women and girls was surrounded, poked and jeered at as “whores” and “cunts”, their blouses were ripped and their underwear torn off. “I had mens’ hands on every body opening,” a distraught girl told the police. Hundreds of women filed sexual molestation charges against men “of north African or Arab origin”. Yet the station was not cleared, few arrests were made and, the next morning, the police report a “quiet night”.

It took almost four days for Germany to wake up to what happened, thanks to social media.

Authorities, police and the media have chosen to withhold information to be “politically correct” and to avoid “racist stamp”. With this decision, in my opinion, they have oftret thousands of women and outright entrusted these to the executioner, to a male violent and sexualized mob without decency, without integrity, without emotion and human value – so that they can do whatever they want with women around the whole world.

That the authorities ignores this, is a deliberate act. Again, this is one of our biggest scandals when it comes to human rights violations in modern age!

The authorities across Europe has by this failed it´s greatest role – namely to protect their own citizens, their women and their children from danger, a danger they knew all about.

Instead of being clear in showing our new country-men, or rats – which limits and values we live by in an egalitarian democracy, these devices together chose to say: -our women are yours, feel free, help yourselves!

Where Islam grows, Islamic hatred increases and freedom dies. Above is a white woman brutally beaten and kicked by Muslims. She was punched in the face with fists, slammed on the head and neck with a helmet, and dangerously kicked in the face and torso after falling down, by Muslim savages. Well, after all, what could anyone really expect from the ones that kill their own daughters, as in ‘honor’ killings for example…

Today women all over the world, simply because they are not Muslims – are victims of hate, gratuitous violence, rape and harassment – the same applies to our children. Just going in Grønland in Oslo is currently impossible without being harassed, spat on or pushed by muslim men and young muslim boys. Simply because you are a woman.

My knowledge that girls and women live with this kind of violence and harassment daily in many Muslim countries, brings me great sadness of heart. Just take a look at the video below. It is painful.

If we let this violent anarchy continue and expand, our children will grow up in a totally new life, an everyday where this massive violent mob might harass and beat you up in your own street just because you dared to walk there – the proof is out there in the streets and on the internet. The mob likes to document their own, grotesque abuse of women and children, and everybody walking alone.

This future, with hatred, violence, radicalization and conflicts is what the government, police and the media with it´s choice of silence, censorship and absence of action made for us all.

And no, I’m not a racist, I do not by this spread xenophobia. It is already out there all over Europe because of authorities cowardice and stupidity. I see the world as it is – and I am a realist!

My message is clear: we must stand together regardless of color and religion! We can not let this rough violence continue – it´s a backfire, it will hit us all. We must exercise vigor against violence and do it now!

Men that use violence against women and children are not men – but infected rats. But it is obvious that we can not rely on the authorities for protection.

Therefore, we need men like in the video above. We need Muslim men, Christian men, atheists, all kind of men who acts the way they are supposed to – to be a protector with decency, with integrity, with emotion and human worth, to condemn and stand together against this violent and sexualized mob to protect woman and children all over the world. Please share.

Also read We need to stop war now! And How children react to the subject of violence against women.

Do you wan´t to follow this blog, please do so up to the right.