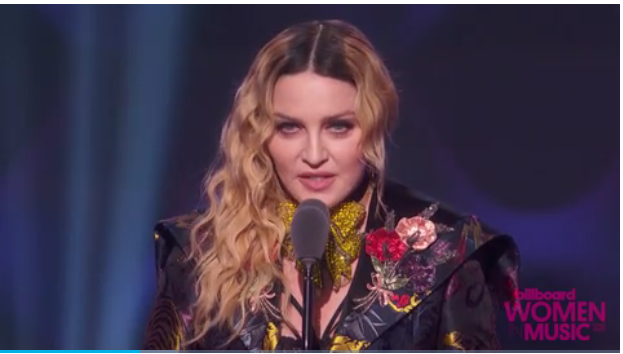 Today I came across this video with Madonna at Billboard 2016 – it is a touching speech, but also an appeal that is important. So I hope you will take the time to watch it.

Madonna gave a heartrending, emotional speech at Billboard Women in Music 2016 that touched on feminism, sexism and much more.

“I stand before you as a doormat. Oh, I mean, as a female entertainer,” she said. “Thank you for acknowledging my ability to continue my career for 34 years in the face of blatant sexism and misogyny and constant bullying and relentless abuse.”

Madonna and I have many things in common; we are both human beings, we are artists, we are fighters and we are women that believes in ourselves. I have experienced over a lifetime how men can love and admire you as a woman, but in the moment they find out that you are an independent individual with your own ideas, thoughts and opinions – and most of all – are not afraid to speak them out loud, the moment that men find that they can`t bind you, control you and change you – then it all changes. Because as a woman, you are not supposed to be an individual and an independent person. You are supposed to be the woman that they have defined.

In my case when I speak out in public, because I’m a writer and social commentator and a woman, men, not all of them of course, do not even bother to use counterarguments. They use an ocean of the most degrading terms for women against me instead of arguments, and follows up with threats to life and health. I would probably not have experienced this if I were a man.

But do I care? Of course not! These men do not define me – that is my job! Nor can they threaten me into silence. I simply do not care about what others might think or say about me – why should I? That´s really not important. The only thing that matters is how I see myself and the respect I have for myself as a human being. You see, this is MY life!

Well, Madonna and I both believe that women have lived long enough under male dominance as well as stupidity. It is time that girls and women stand up and says NO to men and other people who want´s to define them and starts to define themselves as the human beings they are and with it begins to live the lives they’re meant to live.

One commitment only, be true to yourself – girls and women, it is time to rise up and define yourselves!

Please also read The mass attacks on women is violations on human rights.