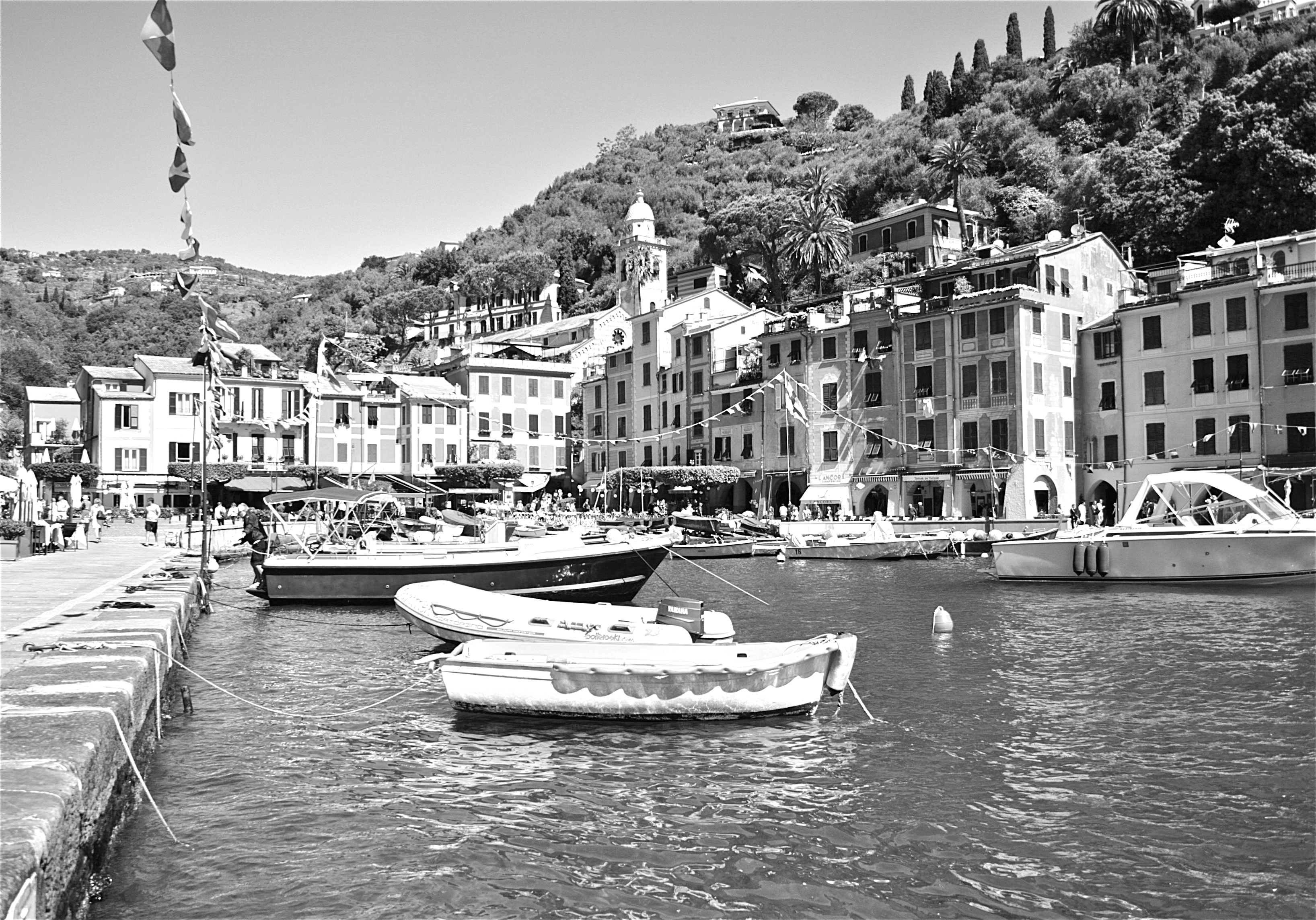 Portofino is an Italian fishing village and holiday resort famous for its picturesque harbour and historical association with celebrity and artistic visitors like me. 😉 It is a comune located in the Metropolitan City of Genoa on the Italian Riviera. The town is clustered around its small and beautiful harbour, and is known for the colourfully painted buildings that line the shore. In Portofino love is in the air. 🙂

Some history. Pliny the Elder (AD 23 – AD 79) referred to Portus Delphini (Port of the Dolphin) as on the Ligurian coast between Genoa and the Gulf of Tigullio. After 1229 it was part of the Republic of Genoa. The town’s natural harbour supported a fleet of fishing boats, but was somewhat too cramped to provide more than a temporary safe haven for the growing merchant marine of the Republic of Genoa.

In 1409 Portofino was sold to the Republic of Florence by Charles VI of France, but when the latter was ousted from Genoa the Florentines gave it back. In the 15th century it was a fief of families such as the Fieschi, Spinola, Adorno, and Doria. In 1815 it became part of the Kingdom of Sardinia and, from 1861, of the unified Kingdom of Italy.

From fishing to tourism for the rich and famous. In the late 19th century, first British, then other Northern European aristocratic tourists began to visit Portofino, which they reached by horse and cart from Santa Margherita Ligure. Aubrey Herbert and Elizabeth von Arnim were amongst the more famous English people to make the area fashionable. Eventually more expatriates built expensive vacation houses, and by 1950 tourism had supplanted fishing as the town’s chief industry, and the waterfront was a continuous ring of restaurants and cafés.

Love is in the air. Portofino became famous in the 1950s with the song “Love In Portofino” which was written by Leo Chiosso and composed by Fred Buscaglione, and released on 12 May 1958. Fred Buscaglione was also the first singer to perform it.

And I must admit, Portofino with all it´s beauty and charm, booth looks and feels like a love song – so this is the place to go with someone you love. And drink wine, not water – because water is very expensive. 😉

Even the trees are according to Lonely Planet, handsome in Portofino. This small, but perfectly coiffured coastal village that sits on its own peninsula, seemingly upping the exclusivity factor by mere geography. Hotels here are hushed and headily priced, but a drink by Portofino’s yacht-filled harbour or a stroll around its designer shops and lovely surroundings, can be easily enjoyed on a day trip from Genoa.

And a day in Portofino is all you need. So why don´t you check out Seadream Yacht Club? SeaDream Yacht Club offers you a casual and personalized luxury unlike any other cruise vacation. This is also probably the best way to explore the beautiful Italian coastline.

Nothing is better than visiting amazing places and then retreat to a fantastic yacht in the afternoon, to relive the experience with a glass of bubbles in the whirlpool together with happy friends, before switching to dinner. At the picture below, I am with my friend Kelly from the USA, just after visiting Portofino and having a dip in the yacht’s swimming pool. Simply Love to Live it!

But again, to Portofino and a trip with SeaDream Yacht Club is something you do with the one you love. Just saying! 😉

Do you wan´t to follow this blog, please do so up to the right. 🙂